When a murder happens, the ramifications of that act affect everyone in its immediate circle. It spreads out like concentric circles in a pond, touching people who never even knew the victim. You see it every day on television. The little boy kidnapped on a walk home from school. The wife and mother who inexplicably disappears. The beautiful model killed, left in a dumpster and burned beyond recognition.

Murder changes everything. It is an assault to the system.

And sometimes, there is murder that seems to have no motive. But we know there’s always some kind of motive, if we look hard enough.

There are some in this world who cast a cold, hard eye on the innocent, and use them for their own aims.

Think about JSOC, the Joint Special Operations Command, which flourished under Vice President Dick Cheney, where CIA operatives, in conjunction with Blackwater LLC, trained assassins to kill al-Qaida operatives–the ultimate outsourcing. Who cares about al-Qaida? I don’t know about you, but I’d like to see them all dead. So why should that give us pause?

Maybe because once you start down that road, it’s hard to get back off. Maybe, if you can take care of certain problems, cleanly and efficiently, you begin to extrapolate the desired results to other situations, and before you know it— 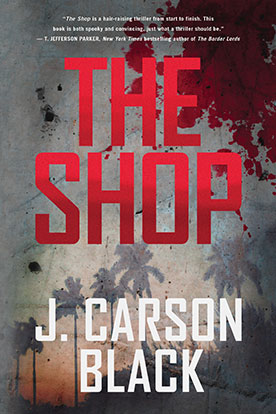 There’s a domestic version of JSOC.

My political crime thriller, The Shop–about a group of young people killed in a house in Aspen–is, I hope, a rollicking good story. But it serves another purpose. I see it as the canary in the coal mine.

There are people who will do you harm at the drop of a hat. They don’t even need the hat. And there are unseen forces behind governments that seek only greater riches, greater power, and to consolidate what power they have so it will never be threatened. So much of what is happening in the world today is the result of the Unseen. The oil pipeline nobody hears about on the news. A secret pact between two countries–and suddenly hundreds are dead. The undermining of a legitimate government. Backroom deals with Wall Street firms. And money–billions of it—lubricating it all like a fine machine.

There’s the increasing feeling in this country, that no matter what he does, the Average Joe is getting nowhere. Because, he feels, the game is fixed.

Brienne Cross and the young people with her in the house in Aspen had no idea what was coming for them, and they would never have guessed why they were slated to die. They were as lambs to the slaughter.

While their story as told in The Shop is fictional, it reflects larger truths.

For my part, I felt compelled to return to the story after I wrote it, and explore their lives–the lives of the victims. So now I give you the Story behind the Story.