I had a great idea for a thriller, and even had the name for it: THE SURVIVORS CLUB. This would be my third book for Thomas & Mercer, the thriller publishing arm of Amazon.

I decided to start the story with a sky-diving accident. The problem was, I had no idea how that would happen. All I had was this: the chute didn’t open. 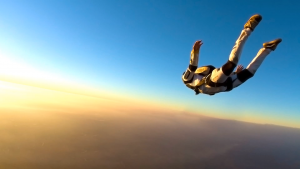 I was pondering this “aloud” on Facebook, wishing I could find a skydiving expert. I knew that one of my friends on FB had mentioned a skydive, so I asked her if she could help me. She said that her husband was a skydiving instructor. So I called him up.

As I talked to him, I learned more and more about skydiving, which would set up the first scene. I asked him how he thought a person might sabotage a fellow skydiver. And that was when the barn doors blew open and I realized this guy was much more than just a skydiver. He has a brilliant mind, and a diabolical one. I realized I’d barely scraped the surface. He ended up being my main man for all things skullduggery. I depended on him for several books, and I probably will depend on him for a lot more.

I’ll never forget that day, sitting on the couch, laptop in hand, as it slowly dawned on me that I had a real catch on my hands. Then and there, I realized that this wonderful man was the key to so many thriller plots. We worked together on three or four books, and the advice from my Go-To Man pulled me out of ditch after ditch—he always knew what to do.

And every time I reread one of those books, I think of him, and the difference he has made in my life. 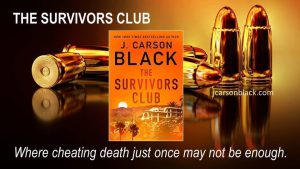 “An utterly engrossing thriller, THE SURVIVORS CLUB, grips us from the very start and simply doesn’t let go. The novel seamlessly achieves that rarity in crime fiction: making our palms sweat while bringing the characters and their stories straight into our hearts. Bravo!” —JEFFERY DEAVER, New York Times Bestselling Author

You can find THE SURVIVORS CLUB here: https://www.jcarsonblack.com/novels/the-survivors-club/