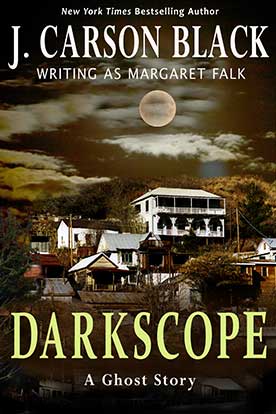 Chelsea discovers an old box camera in a dusty trunk, the film still inside. She uses it to photograph the town. Is it her imagination, or does the stench of death emanate from the camera’s inner workings?

And when Chelsea looks through a viewfinder wavy with age, she sees children in gunny sack clothes, their eyes dark and grainy. Children from the 1920’s. She sees a young man and woman at a train station that no longer exists. The same young woman appears in each of the camera’s photographs.

As the past superimposes itself on the present, Chelsea learns the secret of her powerful family’s dark legacy. With one click of the shutter, she has unleashed a pure and hungry evil that will consume everyone she loves.

Pitted against a supernatural force and stalked by a psychopathic killer, Chelsea rediscovers her capacity to love as she fights to save her beloved uncle–and herself.

Lucas McCord knew his death was imminent. It didn’t matter how he knew. Like an animal searching for a quiet place to die, he had already retreated into that part of his soul reserved for waiting.

With a calmness he had rarely felt before, Lucas surveyed his library. His eyes registered the plaques from the Lions Club and other charitable organizations, the photographs of the Manzanita Mine hung at intervals on the walls, the Joe Beeler bronze—a cowboy and horse—on the desk. There weren’t many things he would miss from this world. The bronze was one of them.

Air stirred the curtains at the open window, and car tires hissed along Bisbee Road. Light rain pattered on the roof. His gaze swung across the room, past the bookshelves with their volumes on mining engineering, business, and art, past the fireplace and the crossed branding irons above it—his brand. The McCord Land and Cattle Company was gone now, parceled into Spanish-style subdivisions.

At last he looked at the glass caseby the window; the tributes to his elder son’s prowess in polo, rowing, and football. The inscription on the largest trophy read: To John McCord for Outstanding Leadership, 1937—the year Johnny was captain of the Fairview Valley Polo Team. Lucas’s throat closed, as it always did when he thought of Johnny. Young, handsome, brave Johnny. His greatest accomplishment.

Atop the trophy, a statuette of a riderless polo pony gleamed in the dull light.

Lucas poured himself some more Scotch, neat. To hell with what Dr. Gold would say. He was dead, tonight. The gods had exacted their price, and it had been high. The library, with all its tributes to wealth and power, carefully orchestrated to impress, now seemed devoid of meaning. He had worked hard to amass a fortune, and for what? Even the powerful Lucas McCord could not defeat death.

The Scotch burned his throat.

Two sons. The result of all his labors. One son dead, the other . . . Lucas’s lips narrowed into a thin line. Had it really come to this? Had he worked so hard, forsaking all the simple joys along the way, to hand his company over to a weakling? His inner voice told him: He’s your son. He’s your son and only heir.

That wasn’t entirely true. There was Chelsea, his great-granddaughter. She carried Johnny’s spark, as if it had skipped a generation.

Lucas sat down at the enormous mahogany desk, his thoughts wandering across three generations. Johnny and Bob, his sons. Johnny’s son, Edward. And Edward’s daughter, Chelsea.

Nothing had turned out as Lucas had planned. His children and his grandchildren had all betrayed him in one way or another. Even Chelsea. She had everything: drive, intelligence, enthusiasm. By all rights the last of the line should be taking over the reins to the company soon—if she hadn’t been born a girl.

But it was Johnny’s betrayal which stung Lucas the most. Johnny—so full of promise, his one perfect creation. Johnny, dead at twenty-six.

How different things would have been if he had lived.

Lucas’s eyes fixed on the box camera in front of him. What had possessed him to resurrect this relic of a tortured past? Possibly he had been thinking of donating it to the Historical Society along with the branding irons and crystal chandelier from the parlor. Yes, that must have been his intention.

The camera was old, its black juteboard scarred and dusty.

A breeze sent the curtains billowing, and rain spattered the carpet.

Look at me. The sibilant whisper might have come from the drizzle outside, but Lucas was certain it came from the camera. The camera’s lens riveted on him like a single accusing eye. Lucas stared back, hypnotized. The eye seemed to stretch, getting larger, and it seemed to Lucas that something stirred behind the glass, shifting in the smoky depths.

Part of his mind rejected what was happening. It had to be an optical illusion. Something to do with the angle of the camera in relation to where he was sitting—a reflection. He leaned closer and squinted.

Darkness swirled, inviting. Lucas had the funny feeling that he could climb right in if he wanted to; he was that small. But that was ridiculous, wasn’t it?

He tried to look away. And couldn’t.

The oily smoke writhed inside the circle of glass, constantly changing. Gradually the smoke formed into a face—a face Lucas loved more dearly than his own life. He forgot that it was impossible. For almost forty years, he had been denied the sight of his son, and now . . .

His heart almost burst with love. The animation! The expression! Like a painted miniature, John’s features were perfect in every detail. At that moment Lucas was unaware of everything except the eye of the camera and Johnny, imprisoned within.

The hologram shifted slightly. Threads of mist crept out toward Lucas. They brushed his face and wrapped around him, cold and wet, like the embrace of a lover in the rain. The mist pulled him closer, gently tugging him within an inch of the little face inside the lens.

Suddenly Johnny’s features twisted in the smoky darkness. Pleading eyes stared out over a mouth opened to scream—a scream of deep, soundless agony.

Lucas knew what he was seeing. Logically he had understood what had happened in the mine, but had never allowed himself to picture it. But now he saw it all—his son, dying.

The tiny mouth gaped wide. Fingers—tenuous threads of mist—fluttered up to a straining throat. Eyeballs bulging from the strain, Johnny’s face pulled down into a hideous grimace. The mute struggle for life seemed to go on forever.

Then, with a look of absolute surprise, Johnny’s pupils rolled up toward his eyelids, the whites of his eyes glimmering like a fish’s belly.

Several things happened at once. The ground heaved under his feet and listed to the side, throwing him off balance. He hurtled to the floor, the air knocked out of him. Thunder shattered his eardrums. A flash of lightning burst behind his eyeballs, blinding him momentarily, and with a groaning roar, the polished hardwood floor seemed to separate and swallow him. He felt as if he were trapped in the wood, unable to move. With a stab of horror, Lucas realized that there had been no lightning, no buckling floor—it had all been inside him. A stroke, he thought. I’ve had a stroke!

The camera toppled to the floor, landing upright. The tiny hologram in the lens shaped and reshaped, playing out Johnny’s death over and over again.

He lay stomach-down on the floor, hands fastened around the legs of the desk, the camera only inches from his face. How could this happen? He couldn’t bear it, couldn’t stand to see the single most wonderful thing in his life dying. He had to get away from the camera somehow. But how, when his legs wouldn’t obey him? When the instructions from his frenzied brain met only a blank wall?

He breathed deeply. He was all right. And the face in the lens was growing dimmer, like a pilot light going out. It had all been an illusion, the tricks of an old man’s mind. He was all ri—

Abruptly, the inner workings of his body froze, refused to work. Eyes gaping wide with comprehension, Lucas clawed at the desk legs, as if by gripping the solid wood, it would somehow save him.

Like a generator choking on its own bluish smoke, his brain started to shut down. Helplessly, mouth working for breath, Lucas tried to start the machine again, but his mind was already shorting out in a series of bursting explosions. In the last convulsive spiral toward death, Lucas’s mouth opened and let life out on a scream. The scream of a man on intimate terms with hell.

(J. Carson Black) has...deftly woven Bisbee’s past and present into a suspense-filled and sometimes frightening tale of lost souls, lost love, murder and deceit...No one who reads the book will be able to walk beneath the Pythian Castle on a windy moonless night and swear there are no ghosts in Bisbee.

(J. Carson Black) exhibits quality craftsmanship . . . Buy the book and send it to people you want to visit here (Bisbee). If they aren't scared away by the plot, they'll soon come in.