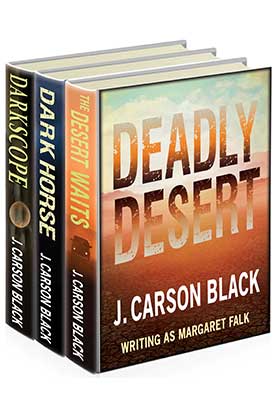 From #1 bestselling author J. Carson Black, a box set of three complete novels—two of suspense and a ghost story of mystery and horror. Writing as Margaret Falk, Black set these books in the Sonoran and Chihuahuan deserts of her home state of Arizona and in southern New Mexico. Now for the first time in one volume: DARKSCOPE, DARK HORSE, and THE DESERT WAITS.

After Chelsea McCord’s marriage falls apart, her uncle talks her into a change of scene — Bisbee, Arizona, the scenic mining town with a notorious past. Her great-grandfather, mining magnate Lucas McCord, helped build Bisbee at the turn of the last century.

Chelsea discovers an ancient box camera in a dusty trunk, the film still inside. On a lark she photographs the town. Is it her imagination, or does the stench of death emanate from the camera’s inner workings? And when Chelsea looks through a viewfinder wavy with age, she sees children in gunny-sack clothes, their eyes dark and grainy. Children from the 1920’s. She sees a young man and woman at a train station that no longer exists.

And as the past superimposes itself on the present, Chelsea learns the secret of her family’s true legacy. With one click of the shutter, she has unleashed a pure and hungry evil that will consume everyone she loves. Now Chelsea must fight to save her beloved uncle — and herself.

THE DESERT WAITS, Book 3
A Novel of Suspense

They are four strangers whose lives converge on a lonely stretch of Arizona desert…four strangers brought together by the brutal murder of a beautiful woman. Each of them has a secret. And all of them have a reason to be afraid.

Now, someone else is going to die. For in the desert, under the merciless sun, there is no place to hide.

Subscribe for updates and get a free ebook!
Subscribe to the newsletter and get a Free copy of The Bluelight Special. A Cyril Landry short story.