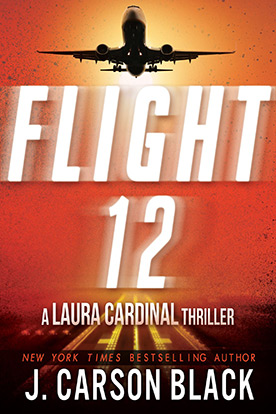 A man waits in line at JFK International Airport to board Skyways Airlines Flight 12 to Rome. His face is impassive, his eyes bleak. His fists are clenched. The woman behind him has a bad feeling . . .

A young woman approaches Arizona Department of Public Safety detective Laura at the fitness center they share, telling her that she is slated for death, and wants Laura to “investigate her murder” when it happens. Weeks later, the woman is found dead in her car—forcing Laura to revisit the most disturbing homicide case of her career. During the course of her investigation, Laura learns the truth about the killer she arrested long ago.

Chapter One of Flight 12 by Crime Author J. Carson Black

Jan DeWitt stared hard at her iPad. People were already lining up for the flight to JFK, but it would be a while before her row was called. She was transfixed by the headline, trying to block out the babble around her, her heart beating fast and hard. She was terrified of flying. Think about something else, she told herself. Read something! But that didn’t work. She’d read the headline three times before she understood what the article was about—a female student at Pima Community College in Tucson, Arizona, who had been found bludgeoned to death in the desert.

The man in the black jacket and jeans across from her stood and slipped his shoulder bag onto his shoulder, headed for the line. He pushed right in front of her—it was as if he didn’t see her at all. At that moment, the loudspeaker blared again, announcing that American Airlines Flight 198, nonstop from Chicago to JFK, would begin its final boarding.

The man didn’t look right nor left. A woman tried to corral her little boy—he dodged her and cartwheeled into the man, but the man didn’t react. He didn’t react to anyone or anything, just stood there like a statue, staring straight ahead. The man shuffled along through the line, his expression impassive. The person behind Jan stepped forward, knocking her in to the man in front—she bumped him with her carryon.

The man in in the black jacket and jeans swung around abruptly and glared at her.

He looked right through her. His blue eyes were like two holes, staring out of a mask. She stepped back involuntarily, tried not to cringe. Stood diffidently on one foot, sideways, so she could keep an eye on him.

She had a bad feeling. It made her think of hijackers in previous years, like the Shoe Bomber. She was petrified during takeoff—it was the worst part. She knew that if they got through takeoff and the plane reached cruising altitude, things would be okay until landing. Statistics said that it was extremely rare—almost impossible—for a plane to crash from cruising altitude. She usually had a drink or two in the airport bar, before, to steady her nerves.

Takeoffs were the worst. By the time her plane reached its destination, she would have had another drink. She was always in a jolly mood by then. Flying in to an airport just seemed so much safer—she could watch the plane’s shadow come up reliably to meet them. It happened every time. Wheels down and it was done!

Adrenaline flooded through her and she turned back, face-forward, trying to avoid his gaze.

He could be a hijacker, or a bomber.

She turned away from him, looking toward the end of the line. Even then, she could feel him staring holes into the back of her head.

Jan wondered if she should say something. It would probably turn out badly if she made a fuss. If she talked to someone. He was very likely just a regular guy with something on his mind. Maybe he’d just gone through a bad divorce or someone in his family had died. Maybe he’d just lost his job.

They hustled down the jetway and on to the plane. He was in the seat behind hers. She stowed her carryon above her and tried to avoid looking at him. He had settled in and was looking at a magazine.

Anyone looking at the man would guess he was thinking hard about something, but they would be wrong.

All his thinking was done.

He opened the flight magazine and looked at the map of the United States. He followed the black arc from O’Hare to JFK. Approximate flying time to JFK was an hour and a half. There would be a long wait after that for the midnight flight to Rome. A very long wait.

The woman in line behind him had been scared.

His anger buzzed inside his head, like insects scratching their legs together. Like a nest of angry, ticking, teeming, scratching insects, ready to boil over.

Nothing to live for. Not now.

He tightened his fingers on the magazine.

His heart started to thump, harder and faster.

Anger. So much anger. It seethed inside him, twisting his gut, wringing him out like a washcloth.

The love of his life gone.

That bitch cop trying to take him down.

Would he be harried and pestered for the rest of his life?

He closed his eyes. He wanted to picture the formations of the Tsingy, but he couldn’t.

He even tried to picture the only woman he had ever loved, but he could not. It was as if he’d never known her.

It was that—the fact that she had left him—that made him do something he swore he would never do again.

He had gotten drunk. Not just drunk, but falling-down blind drunk.

The man stared at the seat in front of him, but didn’t see it. He could only picture darkness.

And the black, empty air.