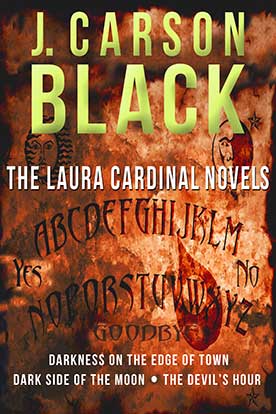 DARKNESS ON THE EDGE OF TOWN, Book 1

When Laura investigates the murder of a fourteen-year-old girl left in a town’s park band shell, she knows immediately what she’s up against: a cunning sexual predator. But why is she plagued by the abduction of a schoolmate eighteen years earlier?

In a runaway case that propels Laura from a lavish Tucson estate to the secretive heart of a north Florida town, she must confront the ghosts of her own past. Then another child goes missing—and Laura must race the clock to find her.

DARK SIDE OF THE MOON, Book 2

When a young couple on their honeymoon is found shot to death in a campground in Williams, Arizona, the consequences go far beyond a simple murder investigation. As the investigation unfolds, Laura uncovers a chilling portrait of the dark side of love. And when she learns of one victim’s ties to an underground organization called the Earth Warriors, she is plunged into a high-stakes conspiracy played out against the unforgiving backdrop of the Mojave Desert—where there are no second chances.

In 1997, the disappearance of three young girls rocked the city of Tucson, Arizona. Eleven years later, one of those girls—Micaela Brashear—comes home, alive.

Detective Laura Cardinal worked homicide for Arizona DPS, but now she’s been moved to the Open-Unsolved Unit. With a new job and a new partner who questions her every move, Laura pieces together Micaela’s fragmented memories in the hope she will learn the whereabouts of the other two children.

When a man walking his dog finds the bones of a child in a shallow grave on the mountain above town, it becomes clear to Laura that Micaela was the lucky one.

But the killer isn’t through yet, and after the fiery death of someone close to Laura, she realizes she faces an implacable enemy.

A superb debut…Welcome to a strong new voice in American Crime Fiction.

Dark Side of the Moon takes you on a perilous descent into a shadowy underworld where light cannot reach, trust can be fatal, and the deepest truth is only another lie. Once again J. Carson Black delivers a harrowing nonstop thrill ride that will eclipse every other suspense novel you read this year!

Black never lets up the pace for an instant

J. Carson Black's THE DEVIL'S HOUR is a superior mystery novel in all respects. Fine prose, terrific suspense, believable characters, and one of the most unexpected and satisfying conclusions I've read in a long time. Highly recommended.