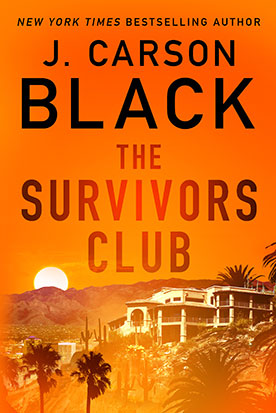 Detective Tess McCrae investigates a grisly crime scene in the ghost town of Credo, Arizona. To an ordinary investigator, the evidence suggests a cartel drug hit. But Tess, with a nearly faultless photographic memory, is far from ordinary, and she sees what others might miss: this is no drug killing. Someone went to gruesome lengths to cover up this crime.

The killer’s trail leads Tess from Tucson to California; from anti-government squatters in the Arizona mountains to the heights of wealthy society, including the rich and powerful DeKoven family, who’ve dominated Arizona commerce and politics since the 1800s. But as Tess follows the trail of gore and betrayal, perfect and indelible in her memory, she uncovers far more than one man’s murder, and solves much more than one isolated crime.

Chapter One from The Survivors Club from Thriller Author J. Carson Black

Alec Sheppard rested his hands on his knees and took a few breaths before turning to walk clockwise around the hotel’s running track. The late September sun turned sultry, the golden light flaring off the windows of the convention center across the way. It had taken him a long time to come back from the accident, but he’d been put together pretty well and while he wasn’t the runner he once was, he could still keep up a good clip. As he walked, he gazed out at the downtown Atlanta skyline. The sun was sinking, an orange ball in the sky.  He looked down at the building below him—a down-at-the-mouth bar.

His wife had left him. He didn’t blame her. She couldn’t understand his “obsession with skydiving”. Didn’t understand why a few weeks after he fell into that swamp in Florida he was already thinking about it. She said he was like a kid, and not in a good way. How could they begin to think about having children when he was like a cocked gun, ready to explode in her face at any minute? Annette was not a risk-taker. He’d known that when they got married a couple of years ago. What had seemed an interesting conversation piece when she was his girlfriend had turned into reality. He lived, ate, breathed, and slept risk. He was risky in his investments (that didn’t turn out too well early on, but he was on the rebound and his presence here in Atlanta was proof of that) and according to Annette he had a risky lifestyle—he was an adrenaline junkie.

Two weeks ago she’d left, wrestling two hastily-packed suitcases to the front door, her face a cold mask. And then the mask crumpled and she cried in long, jagged sobs. He remembered then the reason he’d married her, how much he had loved her, and reached out to steady her by the shoulders, to hold her, to comfort her, as he had done so many times before.

She’d slapped him across the face and said the last words she spoke to him face-to-face. “You!” she said. “You, you…” And turned and walked out into the sunshine, toward her car and the moving van that would take everything away and leave his house and soul empty.

Yet here he was, the blood pumping through him, every sense alive, reveling in the moment. What a bastard. But he could run. He’d been pounding it out on the oval track running around the edge of the hotel, feeling free again and thinking about another jump. Not for a while yet—he had to be in good shape—but he was thinking about it. He even knew where he wanted to go: SkyView Jump Center in Houston. He lived in Houston, so it was the obvious place to start back.

He felt a twinge in his hip. The hairline fracture of the pelvis wasn’t back to a hundred percent, and he wouldn’t be jumping for a while. But he would.

He couldn’t wait to get back in the air.

As Alec walked through the reddening gloom, the sun torching the buildings one more time before going under, he was aware of someone coming at him. A jogger, the rhythmic sound of his running shoes hitting the ground—one-two, one-two. Alec nodded to him as they were about to pass each other, and suddenly something slapped his chest.

Stunned, he watched as the guy kept jogging, one-two, one-two, one-two.  Already just a figure in the gloom. Had the jogger assaulted him? Slapped him? Hit him? He looked down, half-expecting to see blood from a bullet wound. Shock, he thought. I’m too shocked to know I’m hit. And yes, there was red there, on the center of his chest. But it wasn’t blood.

It was a red sticker.  The kind you might see on a broken-down car’s back window to indicate it needed to be towed.

The only thing on it was a number.

He peeled the sticker off his t-shirt and looked in the direction of the hotel door. Aware that he’d heard the door open and close while he was still feeling his chest for blood. Also aware that his heart was thumping much harder than it ever did before he jumped out of an airplane.

The sticky stuff on the back adhered to his knuckles, and it took him a minute to fold the thing up so it didn’t stick to his fingers. Now what?

He started back along the track, feeling a slight chill now as the sun disappeared. Squinting in the gloom.  He stopped by the door and peered at the roof. Nobody here now.  The jogger was gone.

He left the rooftop and took the elevator down to his floor.  Holding the sticker away from his body, his stomach roiling. He didn’t know why, but he felt like a marked man.

The Ghost Town of Credo, Arizona

Right now she was seeing a sixty-eight-year-old Caucasian male named George Hanley, shot to pieces.  Thirty rounds from an AK-47. Brass everywhere–she’d come close to stepping on one of the casings, which had lodged into the spongy wood porch of the ruined cabin.

Careful not to touch anything, not with hands or feet or body or clothing.

George Hanley had that clumsy inanimate look corpses get–caved to the side like a grain sack that had fallen off a shelf, propped up against the blood-stained interior wall as if someone had pushed him there.

His bloodied DL had been thrown on his stomach like a playing card. The wallet they’d found nearby, tossed into a corner of the cabin.

He wore a flannel shirt, tan chinos, and running shoes.

Tess had to hunker down close and squint hard at the license, had to read it through the dark red stain, read it aloud to her partner.

She took photos of the corpse and the graffiti-covered sheetrock wall. Although in truth, she didn’t need to.

She saw the crime scene in every indelible detail, and she would remember it that way. Every bloody flap of skin, every jagged crater—many of them so close together they made one cavernous, many-chambered wound.

Blood soaked into the floor as if someone in a rage had stomped hard on a crateful of blackberry Popsicles.

His torso had been turned into a sieve. Thirty rounds from an AK-47 will do that. From his crotch to his throat, he was riddled with bullets. He’d been shot through each eye, and the duct tape affixed to his mouth.

She had a whole gallery of gruesome images inside her skull, but this was the worst.

Tess had what her new partner Danny liked to call “The Supah Power”. Her memory, virtually photographic, was a parlor trick to the people she worked with, a topic of conversation but also something her fellow cops liked to have her utilize on their own cases.

She was the most popular girl in school.

But already there were too many suspects. This homicide, in the rickety old ghost town of Credo right on the border between the United States and Mexico, looked like a hit. It looked like a hit by an enforcer for one of the Mexican cartels—either Sinaloa, which owned this part of the world, or the Zetas, or the violent upstart group, Alacran—Spanish for “scorpion”.

George Hanley had been riddled with bullets and then “silenced” by duct tape. All of this pointed to a message being sent.

“What d’ya think?” Danny Rojas said behind her.

“What do you think?”

“A sixty-eight-year-old white guy who used to be a homicide dick.” Danny held up his Smartphone. “I looked him up. If it’s the same guy, and I think he is, he was shot up before.”

“He was?” Tess stepped carefully to peer over Danny’s shoulder. She had to squint. Jesus, those screens were small.

“See? He was on a reality show—‘The Ultimate Survivor.’”

“And this. You’re not going to believe this. This is why.” He pulled up the article for her.

She read the headline.

Pronounced “Wetda”. He called her “Guera,” which could mean anything from “blonde” to “anglo” to “white”, ostensibly to get under her skin. But in the couple of months they’d worked together, it had become more of a pet name.

Danny said, “I mean, look. He won the lottery. A three-hundred-thousand-dollar pay-out. The guy sure was lucky.”

“Until he wasn’t.” Tess grabbed his phone and scrolled through the article. In 1991, Hanley, then a veteran homicide detective with Phoenix Metro PD, was shot multiple times in a gun battle with a street gang.  He died twice on the operating table, but was resuscitated. He returned to work but had to take a desk job. Eventually, he worked his way up to lieutenant.

“The lottery, man,” Danny said. “Three hundred thousand dollars. He gave most of it away to the Humane Society.”

Tess was barely listening. She was reading the part where ten-year-old George Hanley had been home sick the day his mother drove his sister four blocks to the elementary school. The car had been T-boned on the passenger side, his sister was paralyzed.

“Somebody else who was lucky.”

An utterly engrossing thriller. The Survivors Club grips us from the very start and simply doesn't let go. The novel seamlessly achieves that rarity in crime fiction: making our palms sweat while bringing the characters and their stories straight into our hearts. Bravo!

Welcome to The Survivors Club—where cheating death just once may not be enough. J. Carson Black's latest thriller takes you into a whirlpool of conspiracy, blackmail, and betrayal, where no one can be sure who is the hunter and who is the prey—a game of blood whose outcome may leave no survivors.

Michael Prescott, author of Cold Around the Heart

J. Carson Black's The Survivors Club is a twisted, diabolical cat and mouse game that will keep you riveted.

Black serves up a breezy thriller with a killer premise: What if people who cheated death once weren’t so lucky the second time around? By the time the plot snakes through twist after twist, you’ll be asking yourself…do you feel lucky?

Alan Jacobson, National Bestselling Author of No Way Out